Today, Professor Putnam talked about the 1972 election then talked about the 1974 impeachment of Richard Nixon. He showed us a video on him resigning and giving up his place in office. I remember sometime last week in my RWS class, my teacher was showing us a scene from Futurama, and there was a scene with Nixon’s head (since the show is set in the future). I thought it was weird and funny how in the show, they preserve only their heads. I researched a little bit more on this since I don’t watch Futurama and I found out that in some episodes, they reference the real life Nixon. In one episode, Bender, Fry, and Leela blackmail Nixon with an audiotape and this references to the Nixon tapes where he secretly recorded things. There was another episode where they referenced the scandal when Nixon resigned. It was when he was sating in the Watergate. It’s really interesting how television shows reference historical things. I don’t watch Futurama, but I am 90% sure that many other television shows have subtly given historical facts in their shows. 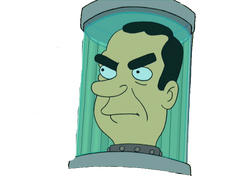