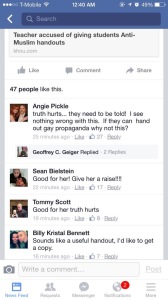 The image I choose to use for my MACRO hack is this about this Facebook post.  I was not the one who took this screenshot of this post, I actually came across this picture while scrolling through my Twitter timeline. I first came across this picture when I had seen someone quote tweeted it and was very upset that some people continue to tarnish the Islamic religion. Although I am unaware of who posted this status on their Facebook, the story “Teacher accused of giving students Anti-Muslim handouts” comes from a local news channel in Texas, where this incident took place. This incident happened very recently, the news website dates it as April 8th, 2015. What really intrigued me to use this picture for this assignment was how people are still so judgmental about other religions, especially Islam, in our modern society.

I believe this image was created (when someone screen shotted it) because they were very upset of the comments left behind on this post. The comments are all encouraging the teacher for he unacceptable action. The high school teacher had passed out an eight page handout entitled “Islam/Radical Islam (Did You Know)” and the material was not approved by the school district. Passing this unreliable/untrue information to high school student just enhances the stereotypes about Middle Eastern people.

I did more research on this issue on google and thats where I came across the video broadcast the news station did explaining this situation. This image had to have been created around the same time this information was aired, April 2015. The image is not pixelated, it is quite clear, and the size is 123 KB. It does not look like the image has been altered in any way through the course of it being spread around social media.

What made me choose to use this image for the MACRO hack was that I was appalled when I read those comments, like seriously?! We live in the United States and our first amendment includes freedom of religion and being able to express it. It’s honestly very annoying that a teacher would think that this is acceptable and is something that was needed to be taught to high school students. The teacher is not teaching them anything, instead she is filling the kids heads with lies. The handout talks about Sharia Law, terrorism, jihad, even beheadings and “If taken hostage by radical Islamists, what to do”. Like are you kidding me, what Muslim person will take you hostage! While many people were upset that the teacher had done this, the people who commented on this post in this image were praising her, they need help. Seeing those comments and what the post was about really drew me to do more research to find out what actually happened.

As I was reading the discussion questions for this week’s class, I noticed one mentioned the Gay Liberation Movement. As I was scrolling through my twitter feed today, I had come across this promotion about how Russell Simmons was advocating for gay rights. The gay community, just like any other community just wants to be accepted. It is crazy how that even in todays society and how we are advancing everyday, some people still look at gays as out of the norm and we have to continue addressing a subject that shouldn’t be a concern in the first place. Gays are humans too and don’t deserve to get the third degree. 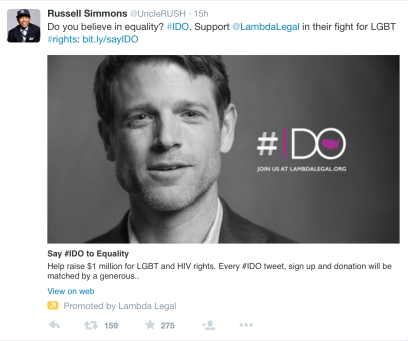 Earth Day is an annual event that we celebrate April 22nd, which happens to be today. This day is dedicated to support and inform people about environmental protection. Earth Day began in 1970 and is now celebrated in over 192 countries. Although we celebrate this day every year there are still issues in our environment, a major one being pollution. To raise more awareness, today you may have seen “Earth Day” pop up on social media. I continued to see it on my snapchat today. 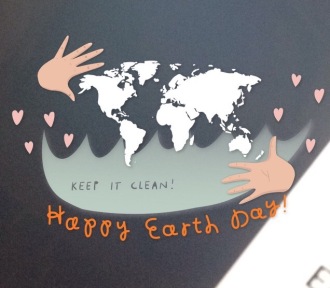 Dr. Putman has recently started discussing Hippies in his lectures. He has said that the Hippies refused to go along with the everyday norm, instead they were considered free spirits. They wore bright colors and were very into experimenting with the different drugs in this time period. The Hippies were all about peace and love and being able to spread that to others. I came across one of my old pictures when I went to San Francisco a few years back and remembered that were the Hippies first began. Sadly I couldn’t find that picture again because my dad’s laptop is a blackhole, so we will use this better one I got from Google. 🙂 This is the same location as the original picture I had with my family.

Why did you ditch us Blum? 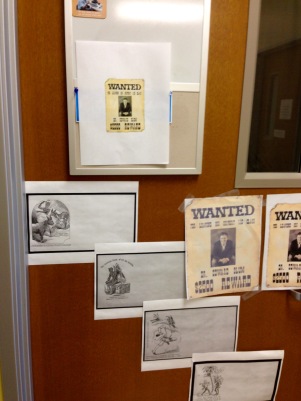 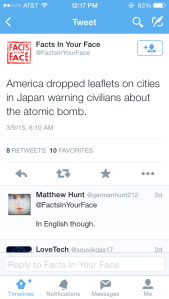 As we continue to talk about Atomic Bombs in lecture, while I was going  through my Twitter feed I had saw this and it reminded me of what we have been discussing. Notice the date that the tweet was posted was a  few days ago, this shows that this topic is still talked about outside of history class. 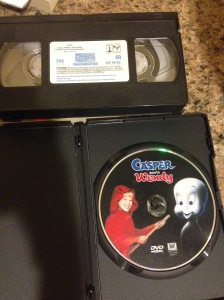 For my Hack I choose to show how history has changed in little ways that we may not always seem to think of. Before I would always watch movies on a VHS today a VHS is considered old and everything is now on DVDs and CDs. I got the Idea for this hack when Professor Blum gave the winner the Titanic movie on VHS and he made a remake saying “the oldest movie on the oldest way to show it”

So as I was about to watch Nextflix, I looked over and realized there was a TV rating in the description for the show. I thought of the lecture when Linnea was going over the TV and music ratings and Parental Advisory. This shows how history is a part of our day to day lives.