I found this image of a German U-Boat that had run aground on the coast of Denmark.  It can be found at this link: http://www.lusitania.net/hunters.htm.  This is a photograph of a German U-Boat that I found in .jpg form.  The picture originally comes from Denmark, where the boat was found, but I found it looking through pictures of the Lusitania which sank a hundred years ago this week.  The photo was taken as part of the George Bain collection of the Library of Congress, and it contains the files of the Bain News Service, one of America’s earliest news picture agencies.  The original photograph was taken on November 5, 1916, and was circulated by the Bain News Service afterward.  The condition of this photograph is fairly rough, due to the early technology of the camera it was taken on.  The image is 184 KB.  It is pretty clear that this photo was taken during the era it portrays, considering the age of the boat itself and the clothing of the onlookers.  I was looking for images of the Lusitania because I knew it had just passed the hundred-year anniversary of its sinking on May 7, but I chose this image because I felt it more compelling.  Seeing the U-Boat that sunk the Lusitania destroyed itself a little over a year later seemed to have a sense of justice to me.

In the early years of World War I, Germany had an unrestricted submarine warfare policy that encouraged German sailors to attack any boat that could potentially be carrying arms and supplies to England from America.  On May 7, 1915 German U-Boat U-20, which is the U-boat pictured, torpedoed and sank the R.M.S. Lusitania on its way from New York to England, killing more than 1,100 of its 1900 passengers including 120 Americans.  This had a great influence on Americans’ opinions about the war and Germany, and is cited as one of the major influences on America joining World War I.  U-20 was accidentally run aground off the coast of Denmark and despite attempts to rescue it, the crew was forced to use one of its torpedoes to scuttle it on November 5, 1916. 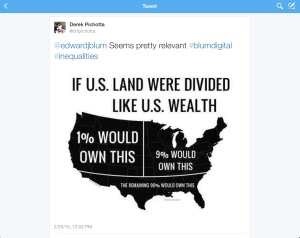 Found a pretty interesting map breakdown that explained present day economic inequality in the United States.  I thought it really pertained to what we learned in lecture earlier this week.