I posted this right outside olmeca on the bulletin board

This image can originally be found in the movie “The Butler”, which came out in 2013. However this exact image was found at http://rebloggy.com/post/movie-black-girls-cinema-black-hair-cinematography-black-history-activism-black/68369435053. This snap from the film is 250 x 239 in size -there are a variety of other sizes- and was one of the first images to pop up when I typed in “black panther movement”. Andrew Dunn, the cinematographer for the film captured this strong image and created a powerful portrayal of the black panther movement and the strength of an African American woman during this incredible time in American history.

This particular image was added to the blog I discovered it on about a year and five months ago, and since then has gained 1,898 notes. It was originally seen in theaters and by all in 2013 when the film was released. The image is in good condition as it was originally on film and is very clear. It is drastically shrunk in size in comparison to other clips. This image is created as a remake to try and capture the intensity of those that were associated with the black panther movement and to fully capture the power and intense emotion of the 60’s-70’s. If this photo were to have been an original it would have been less clear as the cameras were not as technologically advanced as the one of today.

I chose this image to represent my discussion topics because I found that it showed so much power and intensity. With a woman placed in the middle holding the hand gun it demonstrated the equality of power amongst members of the black panther party and the respect they had for women that would stand up and fight for what they believed to be right. The men in the picture are shown with no smiles, but with serious faces and fists in the air, a major symbol for black power during this time. This image captured the severity of this movement as it made a shift from those protecting black communities from police brutality to a movement of over 2,000 followers in support of a Marxist revolutionary group supporting black liberation and power.

We didn’t talk much about dress codes in lecture recently, but due to the heat I thought it acceptable to bring it up. Today I stumbled upon a post of a 5 year old girl being dress coded for her tank top maxi dress because it was “distracting”. Keep in mind she is 5 years old, the schools have implemented dress codes to keep girls mainly from distracting male students and faculty which I find to be extremely sexist. At my old school shorts had to be at finger tip length, which first off is not very fashionable and completely unfair. With dress codes come the fantastic part of having to change into gym clothes if you could not follow the codes. This not only is embarrassing, but is a form of slut shaming the young women. It is understandable if a young lady is dressed completely inappropriate, but being dress coded for shorts and a tank is beyond ridiculous. Dressing is a form of expression and is very important to our youth. And dress coding a five year old is absolutely absurd.

In lecture today we talked about the feminist movement and how women were adjusting to the idea that they should depend on financial independence rather than a husband and that sex without marriage was okay. Putman brought up the book of Sex and the Single Girl and how it was controversial, which led me to think of how much society has changed. Today books and films such as 50 shades of Grey become best sellers and some of the most popular movies. Sadly, these films and books devalue women and portray men to be the more powerful figures. Makes you wonder what the women who fought for so many rights would think of how women can be portrayed now, and how women of today support films and books such as this.

Today in lecture we talked about how many hippies gathered in peace at the golden gate park in San Francisco. Though there were no big named bands playing everyone just got together and shared love and ideals with one another. Today there is an event where thousands of youthful souls gather together at the same location to celebrate music and youth. Outside Lands is a three day musical festival in which big named bands all come to golden gate park to play for huge crowds. It seems as if history has repeated itself as the youth gather together to appreciate music and ideals. All dressed in hippy outfits and with open minds 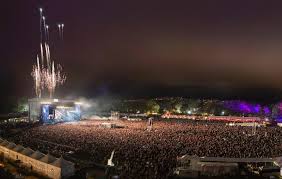 The atomic car, interesting that the idea is back. It’s said this car can run for a hundred years on one tank of fuel. It runs on Thorium which is a radioactive element discovered in 1828.

This is my thesis: Woodstock was not just simply one of the most legendary music festivals to occur in history but also changed the dynamics of large music festivals forevermore. Woodstock set the stage for concerts to not only be about listening to the music but also to push the limits of being under the influence of whatever alcohol or drug of choice. In 1969, the Woodstock Festival gave recognition to a counterculture which “tried to ignore social and cultural norms, proposing instead a new moral foundation for American life”(Schultz, 469). This new American life will be recognized throughout my essay as I will progress into our modern society and the concert/drug culture that precedes with it.

The change in the 3 R’s has gone from relief, recovery, and reform to reuse, reduce, and recycle. It shows how our country and world has partially transformed into a society that focuses on environmental status’. As in the past this was the last of their worries during the great depression. 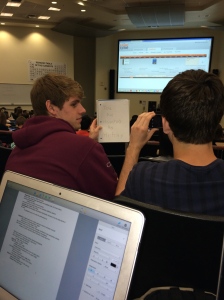 Here is a hack of me hacking a hack in history lecture. History is always occurring, by learning about the history of America we are becoming more aware of our surroundings and creating new historical events. As these students hacked the class thinking no one was paying attention, I stopped and took a picture of them as they became apart of my history in that lecture. They noticed me though because I had my flash on.. not so subtle. Actions that affect you are always taking place and prior to this picture I had no idea what I would hack, so in which case they changed my history and helped me with my grade unintentionally.