This is a picture of 14-year-old runaway Mary Ann Vecchio kneeling over the hemorrhaging body of 20-year-old student Jeffrey Miller after he was wrongfully murdered at the infamous Kent State Massacre. His was one of the four innocent lives taken that day and his memory lives on through this powerful image captured by photography student, and later Pulitzer Prize winner, John Paul Filo. As a photography student at the university, Filo was in the photography lab during the rally and ran out to investigate the sound of gunshots. He began photographing the chaos, thinking the bullets were simply blanks meant to scare the protesters, even daring to blatantly photograph a nearby guard carrying a loaded gun. When he realized the bullets were real, he continued taking pictures with his Nikkormat camera, despite his fear, so he could document the true injustice committed by the National Guard that day.

This tragedy occurred On May 4, 1970, 45 years ago almost to the day. Filo’s picture was released soon after by a small daily newspaper called Valley News-Dispatch. It was later picked up by major news outlets like the New York Times and was used as the primary image of the Massacre. The picture has since been reprinted and circulated since it’s debut in 1970 as recent as 1990 in People Magazine. It remains in great condition, very clear and distinguishable with no pixelations due to the fact that it was taken by a seasoned photographer with a quality camera. It’s current condition does not represent the way it has been archived because the image was originally a clear picture and has remained as such throughout four and a half decades of reprint. The only aspect of this photo that makes it less than perfect is the black and white hue, which works to diminish some of the details in the picture. I found this 798 x 617 image when I googled “Kent State Shootings”; it was the first picture that popped up during my search due to its massive popularity. Despite the 45-year anniversary, it remains as infamous as ever. The event it depicts is remembered every year as the tragedy it was and the image continues incite raw feeling today.

I chose this image to represent the Kent State Massacre because in my opinion, it suitably depicts the pain and anguish caused by the shootings that day. The photographer captured this moment in spite of the fact that his own life was at risk. I think that is the most powerful aspect of this photo, a true sacrifice in order to raise awareness and initiate change. This image is candid and so real and because of that, became the symbol of the event and played a major role in encouraging the nation to force the government to take responsibility. This image joined together people in every state, on every college campus in a protest against the murder of unarmed students. The picture also reignited the anti-war cries by gracing newspapers alongside headlines such as “The War Has Been Brought Home”. This picture served an almost revolutionary purpose and goes down in history as one of the most powerful images ever produced. That is why I chose this specific image to represent my topic; it triggered the unity of millions under one cause, not only in the United States but in Vietnam too. News of the Kent State shootings accompanied by photographs, this being the most prominent one, reached American soldiers fighting in Vietnam and convinced a majority to refuse service. These soldiers especially refused to go through with the planned invasion of Cambodia, forcing Nixon to change tactics and comply with the original protests of the students. 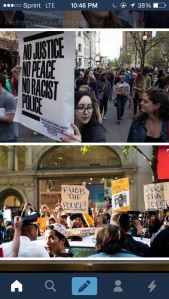 I was scrolling through my tumblr feed and repeatedly saw posts about the riots in Baltimore. These protests against police racism resemble the fight for equality of the Civil Rights Movement. Though we have made a lot of progress since the 60’s and 70’s, there are still instances of racism in today’s society. This is most prominently shown in the news headlines when a black man is subject to Caucasian police brutality more so than his white counterpart. Racism is still a huge issue today and these protests will work the same way to change the nation’s policies. 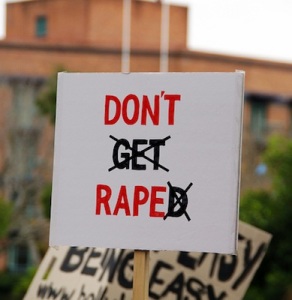 This picture represents how feminism has empowered the fight against rape. Instead of “Don’t get raped”, a phrase directed at women in the past, we should change it to “Don’t rape” to address the men or the rapist. As a society, we should shift the blame from women to men and place more responsibility onto the rapist in order to discourage sexual assault. From the 6th grade, girl’s and women’s dress code is tailored to the benefit of men. Everything we do is centered around the needs of men, which is a huge issue pertaining to rape culture. Women are afraid to speak up in fear of getting blamed as so many women have been. Take back the night marches and “walk a mile in her shoes” are orchestrated to turn the blame from the victim to the rapist. Just as the feminist movement of the 70’s changed women’s role in society, this movement against sexual assault will change life as we know it. 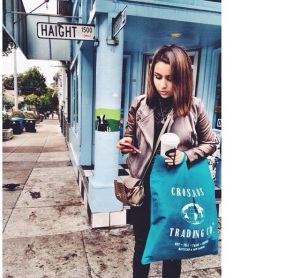 I live in the Bay Area and; therefore, have frequented San Francisco as I was born there. I have been by haight and ashbury many times, and I recently learned its historical value and representation of the hippie movement in the 60’s. I remember taking this picture of my friend when we were shopping in the city on haight, which I found coincidental since we were learning about hippies this week. It is now a park where the homeless and drug abusers call home, no where near the greatness it was in its hay day. 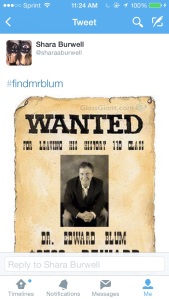 I really hope  mr. Blum sees all of these hacks and finally responds or, dare I say it, comes back? I’m super curious, as is everyone I’m sure, as to what would cause him to abandon our class. I hope it’s nothing serious and we find him in good health and happiness. 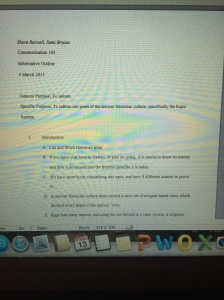 My roommate and I are doing a partner speech in Comm103, a required freshman class. Our assignment is to research the traditions of a past culture and we delved into the history of the Ancient Hawaiians, which we found really interesting and ended up reading more than necessary.

The United States should have intervened in WWII by 1939 in order to stop the spread of communism, prevent human rights violations, and encourage economic prosperity.

The U.S. was a safe haven for many Jews on the run from Hitler’s tyranny in Europe. Despite it’s seemingly accepting border patrol, there was a boom of anti-semitism in the United States during WWII. No one knows for sure when the U.S. government found out about the atrocities committed against different races in Europe in the late 1930’s. There is a conspiracy that FDR and his cabinet had some knowledge of Hitler’s crimes against the Jewish people but turned the other way until 1941 when we were attacked on U.S. soil. 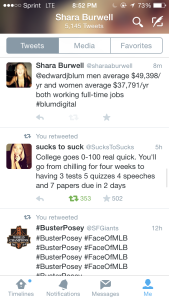