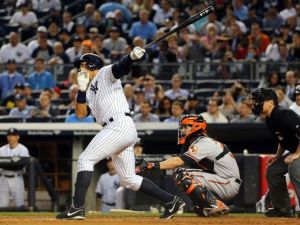 I was watching MLB highlights and stubbled across an article about Alex Rodriguez passing Willie Mays on all time home run list. The photo at a size of 300px by 250px was captured on May 7th. Anthony Grupposso from USA TODAY Sports captured the historical photo were it was recognized as the header for one of the most popular websites across the nation. The image was captured as a historical archive that spread like wild fire across social media. The moment the ball left the bat thousands of people in the stadium were witnessing history. The 661st career home run from Alex Rodriguez puts him in sole possession of fourth place on the all time home run list. The image is still new and is very high quality. The technology now has the ability to capture every detail in its entirety. The photographer was able to capture the faces of the New York Yankees fans that were in attendance

I picked this image because I was reading about the history of sports. I came across a story of how baseball is america’s past time. There is a section in hist about the struggle for equality. Alex Rodriguez is a black male playing a professional sport. In today’s society it is acceptable, however, Major League Baseball Hall of Fame members such as, Hank Aaron and Willie Mays were two black males who paved the ground for the future of equality in sports. Willie Mays had a Hall of Fame career playing a total of 22 seasons in the MLB. Hitting towering 660 home runs through out his career. Young players such as Alex Rodriguez grew up idolizing players such as Willie Mays because of the success they have had in their careers. Alex Rodriguez has had a very rocky career. He has been publicly scrutinized because of his P.E.D. (steroids) usage. Shamming his career to all of the baseball community. The New York Yankees organization almost kicked Alex Rodriguez off of the team because of the shame he brought to their organization. They made a good decision keeping the 39 year old superstar.

History can be made everyday at any moment. Keeping aware of your surroundings you can capture a moment that can become something amazing. This photo taken by Anthony Grupposso is an example of just that. Alex Rodriguez may never be inducted into the Hall of Fame but he will for sure have his name and piece of history within it.