I found this image of a family that is gathered in their home watching television on a website for a class at a different university. It can be found at this link: https://academics.skidmore.edu/blogs/womenandlit1940-1970/domestic-bliss-consumerism-advertising-in-the-1950s/ . This is a photograph of a family. I acquired it in the JPEG form. It is unknown where this image comes from originally. The author of the page I found it on is a group of Women’s Literature students at another university who are studying the years  between 1930 and 1970. I think this image was to display the prevalence of television in this time and how it changed the way that people entertained themselves in their free time. It is safe to assume that this image was created in the 1950’s, judging from the family’s choices of clothing, the style of the father’s uniform, and the model of the TV. The condition of this photograph is clear. It is not given when it was released, but it can be assumed that it was in the 1950s. The image is 27 KB. This photo seems to me like it was taken in the era that it portrays, but considering there isn’t much context in the photo, other than the clothing and the items the family has, it could also easily be a photo that was created to depict this time period. I was looking for images of the 1950’s consumer era and this was one of the first images that came up when I typed in “1950’s consumerism.” For this project, I originally intended to use an advertisement from the 50’s, but I felt that the television could encompass one  pathway of how advertisements were distributed in this time.

In the 1950’s, consumerism boomed. People were spending more money because they gained higher wages, and veterans were getting benefits. With this new influx of money, people were wanting to spend it. Advertisements were a huge deal in influencing what people bought. Television was a huge portion of the culture of this time. People could be entertained while staying home using this. They could watch the t.v. for sporting events and movies, and even ads. 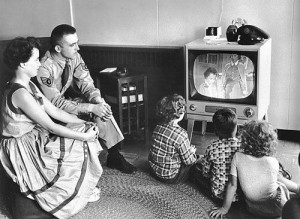