Today Putman mentioned the My Lai Massacre in class today that took place in March 1968. US soldiers brutally murdered women, children and the elderly. There were about 500 innocent people from South Vietnamese that were killed. The people did not provoke retaliation yet, when the soldiers arrived and the US military fired at them. This was a real wakeup call for the soldiers, they did not even know why they were still fighting. Their target was to kill Viet Cong people, but none of them were found in the village. Most of the soldiers that killed the innocent people it was due to frustration. They were tired of being at war and wanted to go home. Below is a picture of the My Lai Massacre, people were chased into the road and shot. 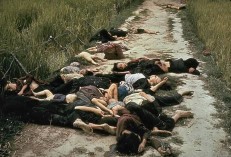