In small and large lecture, we have been discussing the Vietnam War and all of the protests that went along with it. The protests were a huge part of why the war is so memorable. I am currently watching House of Cards and one of the main characters is Claire Underwood played by Robin Wright. Robin Wright also plays Jenny Curran in the amazing movie (based around the time of the Vietnam War) Forrest Gump. In House of Cards, she is the wife of an important politician who ranks higher and higher in government as the show proceeds. (spoiler alert) One day, during an interview, she tells the world that she was raped and had an abortion. As a result, pro-life protestors make their voices known when they constantly protest outside of her home and cause the police to intervene. Her character is on the defense of the protestors and eventually she has to make some decisions based on these protestors. In Forrest Gump, she plays one of the protestors themselves when she becomes a hippie during the Vietnam War. As from lecture, and all of our readings we know that the protestors and the hippies from the 1960s made an impact on society and the war effort. This actress plays two very different characters on opposite sides of protests, but they both present how powerful protests and demonstrations can be when it comes to legislation. I love history and I love media so I always get excited when I can discuss both at the same time! 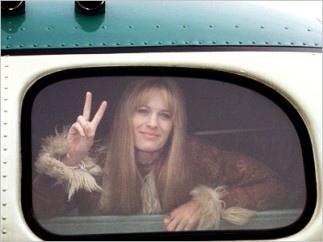