This is a picture of a psychedelic poster of The Beatles Yellow Submarine hanging up in my garage. In class we watched the video of The Beatles performing “I want to hold your hand” and how this upbeat style of music would go on to define the 1960’s. Other groups such as Cream and The Beach Boys were in the same spectrum as The Beatles, and can be contrasted with the grunge era of the late 80’s and early 90’s. The attitudes felt during the 60’s were that of peace, as the new generation were trying to urge the United States to back out of Vietnam. 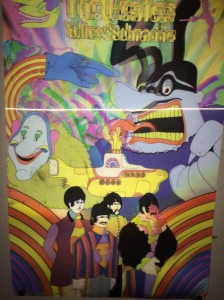