I purchased this black and white skull as a wall decal for my apartment from Ikea. However, it got me thinking about a Mexican tradition I learned about in Spanish Class. As part of “Dia de los muertos,” the spanish version of Halloween, people decorate skulls in bright colors and patterns as seen in the second picture. This is supposed to paint the idea of death in a positive light instead of a sad one, and to promote the idea of a joyous afterlife. If we go even further back in history, we see that the Mexicans actually adopted this tradition from the Aztecs. Since we live so close to the Mexican border and since our school mascot is an Aztec, I thought this would be interesting to share. 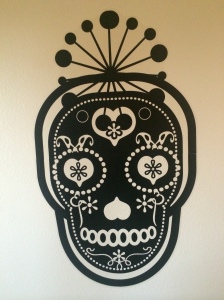