Recently in class we discussed African American artists and their rise to fame during the 1950’s and 60’s as a response to the dominant white culture of the time. These artists played music that, at the time, was scandalous to many conservative American families, and the fact that white children also liked their music served to aggravate racial tensions that had been slowly simmering beneath the surface of American society. The movie “Get On Up” chronicles the story of one such artist, James Brown, and his rise to fame despite the many hardships he faced as an African American in in the United States during one of its most turbulent periods of racial unrest. 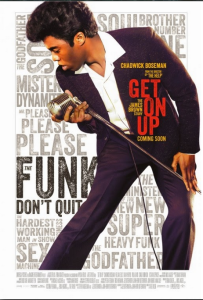