The 1950s were known as the Age of Affluence.  This decade of plenty is when the “middle class” was established.  Consumerism among the middle class sparked strong economic growth and industries began producing new and desirable products.  These products like the t.v., washing machines, and cars (to name a few), which had previously seemed like luxuries, became the norm among young families and were viewed as necessities.  Because American’s had more money from the increase in wages or just from benefits from being in the war, American’s in the 1950s were heavy consumers.

The automobile during this time was made affordable to the average american, so the automotive industry took off.  The federal government took notice and in 1956 they passed the National Interstate and Defense Highways Act.  This Act, which was the greatest “work project” of it’s time “authorized $25 billion to build 41,000 miles of interstate highways over the following ten years” (Hist 439).  Not only did this transform american transportation but it also changed the landscape of America as well.

The roles of women during this time began to change as well.  During World War II, while the men were off at war, women had become the providers and they were the workers of the time.  However, when the war ended and men came home and the baby boom generation began.  Men were then known as prominent working gender.  It was expected that women of this age stay home to take care of their children, to cook, and to clean their homes while their husbands worked.  This became the social norm and very few women actually had jobs other the housework.  The few, however, that did work could only get jobs as secretaries, nurses, teachers, or waitresses; jobs that were viewed as “women’s work” anyways.

The 1950s, as discussed in our large lecture, was also known as the time when the 2nd Reconstruction began.  The case of Brown v. Board of Education in 1954 overturned the previous precedent in the case of Plessy v. Ferguson.  Oliver Brown won this case and desegregated public school systems so that blacks and whites could go to the same schools.  However, this court ruling wasn’t implemented until 1957 when nine African American students decided to attend Central High School in Little Rock, Arkansas.  President Eisenhower sent a thousand troops to protect the students from their racist community so that they could attend the school. 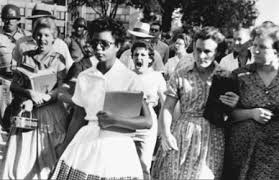 Another important movement at the time began after Rosa Parks was arrested in 1955 for sitting in a “whites only” section of a Montgomery bus.  After her arrest, in hopes to integrate the Montgomery Bus Systems, the African American Community began a boycott and refused to ride the busses.  In 1956, the African American’s non violent efforts paid off and because the bus systems became bankrupt, due to the dramatic loss of passengers, public transportation was then desegregated.  Later, due to the efforts of the bus boycott, the over turn of Plessy v. Ferguson and countless other efforts (ie. Jackie Robinson desegregating sports, Truman integrating the military, or the uproar about Emmett Till’s death), the Southern Christian Leadership Conference headed by Martin Luther King Junior began and lead into the 1960s.

One thought on “The 50s and 2nd Reconstruction”