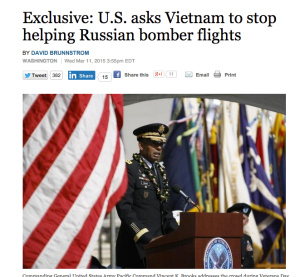 As our topic of discussion has been the Cold War for the past few lectures, I think it is important to look at how the old alliances born in the Cold War often resurface in modern times. Specifically, the United States has been negotiating with Vietnam to stop allowing Russian bombers to refuel in Cam Ranh Bay, an old US military base. Relations between the US and Vietnam have been rebuilding slowly since the Vietnam War, yet Vietnam still remains closely tied to Russia economically as a result of its old ties to the Soviet Union. This makes negotiation difficult, and also shows that the Cold War may be over, but its effects are still highly visible.