This semester I am taking a Women’s Studies 101 class. This past week we were required to watch a movie called Iron Jawed Angels. It is an HBO movie that takes place during the first wave of feminism, specifically in America, in which women fought for the right to vote. The movie revolves around characters such as Alice Paul, played by Hilary Swank, Lucy Burns, played by Frances O’Connor, Ruza Wenclawska, played by Vera Farmiga, and Ida Wells-Barnett, played by Adilah Barnes. It displays how Alice Paul and other suffragists protested for a Constitutional Amendment. These women were harassed, mostly be men as depicted in the movie, as they marched and stood in protest. The movie also shows how the suffragists were put in jail and mistreated after being charged with “obstructing traffic” because they stood on the street in protest. By the end of the movie, all 216 suffragists are released from jail and on August 18, 1920 the 19th Amendment is passed by Congress.

In the video, all of imprisoned women start a hunger strike where they don’t eat as a form of protest. As a result, Alice Paul, played by Hilary Swank, is horrifically and repeatedly force fed. 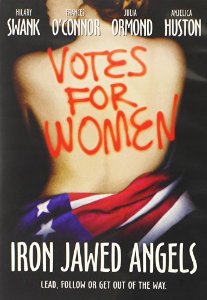